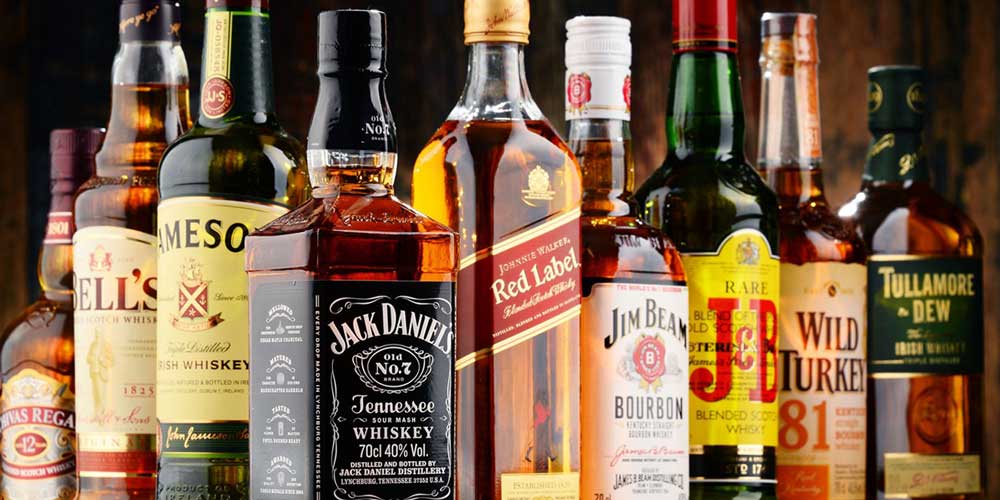 What is whiskey? What is whisky? Are they the same thing? Kind of. Is there really a difference between Scotch and Irish whiskey? Are all American whiskies called bourbon? Where does Japan fit into all this? Whiskey is a complex drink with a complex history. Modern whiskey is a complex network that spans the entire globe. But, understanding whiskey does not have to so complex. We will examine and answer the questions above and more, while we explore the different whiskies of the world and what makes them so unique. But, before we dive into the differences between Rye and Speyside, or blended Bourbon and Pot still Irish, there are some basics that need to be established. From there we will discuss the various styles of whiskey, and then common terminology used when talking about the aging and bottling process.

What is whiskey? Whiskey is defined as an alcoholic beverage distilled from grain and aged in wood barrels. There must be no added flavoring for a whiskey to be a whiskey; all the flavor must come from the barrel the whiskey is aged in. That means that whiskies with cinnamon, chocolate, root beer, etc. flavoring added to them are not technically whiskies. The type of grain used in the distilling process and the type of barrel used during aging both determine the type of whiskey that will be produced. The location plays a big part in defining a whiskey, too.

What is mash? A whiskey’s mash is the mixture of grains used in the distilling process. A mash bill is a breakdown of what is in the mash. Most whiskey have requirements on what can make up their mash bill. For example, Bourbon’s mash bill must be 51% corn. Rye, Barely, Corn, and Wheat are the most commonly used grains in whiskey mashes, though some newer distilleries are expanding that vocabulary by introducing things like oats, millet, and quinoa to their mash bills. A sour mash is when a portion of a previous batch of mash is used in the making of a new batch. Some distilleries use this to ensure even flavoring, as a type of quality control. Despite the name, this adds no sourness to the flavor profile of the final whiskey.

What is a whiskey’s proof? Proof refers to the amount of alcohol in a beverage and is directly related to ABV (alcohol by volume). The proof lets you know how strong the beverage will be. Most whiskies range from 80-100 proof. An easy way to decipher what that means is to remember that ABV is exactly half of the proof. So an 80 proof bottle is 40% alcohol and a 100 proof bottle is 50% alcohol.

What is a dram? A dram is the standard name for a serving of whiskey. This term was traditionally associated with Scotch whisky, though other countries have adopted it to describe their own whiskies.

Bourbon, though mostly made in Kentucky, can be made anywhere in the U.S., but it must be made within the U.S. Our federal laws regulate what can and cannot be called bourbon whiskey. The requirements include: Being made from a mash bill that is at least 51% corn, distilled to no more than 160 proof, Entered into the aging barrel at no more than 125 proof, must be aged in new, charred oak barrels, and must be bottled at 80 proof or more. Bourbon, because of the corn mash, is usually sweeter than other types of whiskey and has a full-bodied feel.

Tennessee Whiskey is very similar to Bourbon. In fact, most Tennessee whiskies meet all the requirements to be called Bourbon. The only difference between the two styles is that Tennessee Whiskey must, of course, be made in Tennessee, and it must also go through a process called the Lincoln County Process. The Lincoln Country Process is a filtering process where the whiskey is filtered through a thick layer of maple charcoal before it is put into a new charred oak barrel for aging. The distilleries that use this process claim it improves the flavor of the whiskey and creates a more mellow drinking experience.

Rye Whiskey, after virtually disappearing during Prohibition, is the fasted growing whiskey market in America. Rye Whiskey must be made with a mash bill that is at least 51% Rye. The remaining requirements for American Rye Whiskey are identical to Bourbon. Having a mash bill of at least 51% Rye creates a much spicier flavor profile and offers a distinct alternative and complement to the sweetness of Bourbon. Before Bourbon gained popularity with the rest of the country, classic whiskey cocktails like the Manhattan, Old Fashioned and Whiskey Sour were all made with Rye Whiskey. Today’s bartenders are starting to reintroduce Rye Whiskey into the national cocktail scene. Canadian whiskey is also called Rye whiskey, even if there is no Rye present in the mash bill. This is for historic reasons and practices that are no longer widely followed.

Irish whiskey was once the most popular spirit in the world, but due to the rise is scotch and shifting trade power the whiskey capital of the world went from 30 distilleries to only 3. Now, Irish whiskey is enjoying a renaissance and there are plans for almost 20 new distilleries to be built in Ireland. The only common rules for all types of Irish whiskey are that it must be distilled and aged on the island of Ireland. This includes both Northern Ireland and the Republic of Ireland. Irish whiskey can be made in an array of styles like, single malt (though this is more common with Scotch Whiskies), single pot still, and blended. Irish whiskey is generally considered the smoothest of whiskey styles, and one of the more complex. Irish whiskey must be aged for a minimum of 3 years in wood barrels.

Scotch whisky has been the most popular style of whiskey for many decades now, though other styles like Irish, Rye, and Japanese are quickly catching up. Scotch must also be aged for a minimum of 3 years in oak barrels. Many Scotch distilleries use former Bourbon barrels to age their scotch. Barely is the most common grain in the Scotch mash. The Scotch is usually introduced to peat during the distillation process, which gives Scotch its distinctive smokiness. While there are different styles of Scotch, like single malt and blended, Scotch also has distinct characteristics depending on the region of Scotland it was distilled in. Scotch was the only form of whisky that advertised itself without the ‘e’. They did this to differentiate themselves from Irish whiskey. Though the spelling “whisky” was used to refer exclusively to Scotch, it is now used to refer to select other styles, like Japanese whiskey.

Japanese whisky is the fastest growing global market for whiskey. The boom started when Japanese distillers consciously tried to recreate Scotch whisky in Japan. The pioneering Japanese distillers intensely studied the Scotch process and imported Scottish equipment in order to faithfully recreate their own whisky. Due to the quality of water and grains that were used in Japan, their whisky took on a unique flavor that set it apart from scotch. Since its initial boom, it has gained worldwide acclaim and won awards that were usually won by the finest American and scotch whiskies. Japanese whisky is made in various styles like blended and single malt.

Barreling and aging are some of the most important aspects of whiskey production. The barrel, or casks, used for aging determines the flavor the whiskey will take on. The only flavor allowed in true whiskey, besides the flavors given by the mash, is that which the whiskey absorbs from the barrel it is aged in. The amount of time the whiskey spends in the barrel, the process known as aging, will determine how intensely the flavor of the barrel will be absorbed into the whiskey. The longer a whiskey is aged, the more complex the flavor becomes. Take a look below to find out what some popular aging, bottling, and barreling terms mean.

Bottled in bond- This is a term designated for American spirits where the spirit must be the product of one distillation season by one distiller at one distillery. It must have been aged in a federally bonded warehouse under U.S. government supervision for at least four years and bottled at 100 proof. This makes it similar to the concepts of single malt or small batch.

Single Barrel- This means that the whiskey placed in the bottle is all from the same aging barrel, rather than a blend of multiple barrels from the same or different batches. Many distilleries blend different barrels to ensure consistency across bottling.

Double barrel- This is used when a whiskey is aged in one type of barrel for the first part of aging and then barreled again in a second type of barrel for the second part of aging. This imparts more complex layerings of flavor and is most often done with sherry, Rum, or dark wine barrels. The term “double Barrel” is mostly used for American whiskies. Other countries might use the term “finished” when describing the double barreled process, for example, a scotch finished in sherry casks.

Blended-This means that the whiskey has been combined with a neutral grain spirit, in order to create a smoother tasting experience. Some rye and bourbon whiskies are blended with other Ryes or Bourbons to create more complex flavor profiles.

Single Malt- This is a designated label for whiskies, especially Scotches, that are made from malted barley and by a single distillery in a pot still. Single Malts in other countries have more relaxed requirements. Many American single malts use malted rye instead of barley.

Straight-This means that the whiskey has been aged for at least 2 years. This is most commonly used with American whiskies.

Small Batch- This can be considered a midway point between regular bottling techniques and single barrel. This is when the whiskey is blended from a small number of selected barrels. This usually, but not always, indicates a better quality product.

Cask Strength- This is when the whiskey is not significantly dilute with water after the aging process. Diluting after aging is standard whiskey practice and ensures a smoother palatability, and lowers the price. Bottling at Cask Strength keep the proof high and many enjoy using higher proof spirits in cocktails.

Hopefully, all this information will help you navigate the ever-growing world of whiskey. With so infinite variations on so many styles there is bound to be a whiskey for everyone.

Want to know about our events?